Do you see colorful beetles in your garden attacking your plants and skeletonizing leaves? It could be either harlequin bugs or Japanese beetles – both relatively new to our area.

What is a harlequin bug? 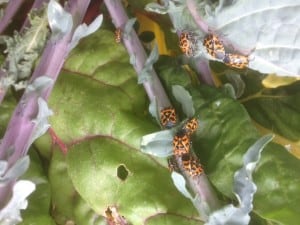 Harlequin bugs are black stink bugs that are marked with bright orange and red spotting. As of a few years ago, they were only found in Southern Colorado, but they are becoming increasing familiar here in Boulder and Denver as their range moves north. Harlequin bugs are most destructive to cabbage, kale, and chard, but it’s possible to find them on any plants in your garden. They suck the sap out of plant foliage, leaving white and brown spotting.

Harlequin bugs can have three generations in one season in Colorado, so you may find eggs, nymphs, and adult harlequin bugs in your garden all at once. Adults can overwinter in plant debris. 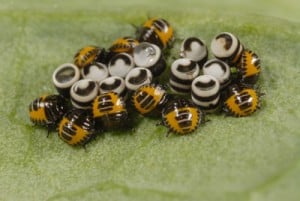 Harlequin bug eggs (white and black striped eggs) are laid in neat rows on the underside of leaves. Here, eggs are shown along with harlequin bug nymphs. 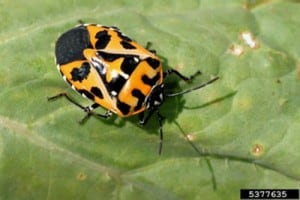 Adult harlequin bug. After feeding, they leave white and brown spots on the leaf.

What is a Japanese beetle?

Japanese beetles are iridescent green beetles with brown wings. They tend to attack tomatoes, beans, grape vines, roses, and certain trees, but they can be found eating lots of different plants. They eat the leaf parts between the veins (skeletonizing the leaf surface) and can cause enough damage to severely stunt and even kill plants.

Japanese beetles lay white eggs on the soil surface, which then hatch into white grubs that feed on plant roots. These grubs can cause some damage to vegetable crops, but the adult beetle tends to be more worrisome in the veggie garden. Japanese beetles can also overwinter as larvae in the soil. 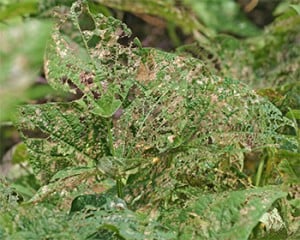 Bean leaves that have been “skeletonized” by Japanese beetles. 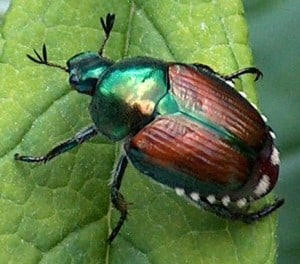 What do I do to save my garden?

Here are three things you can do to get rid of harlequin bugs and Japanese beetles: 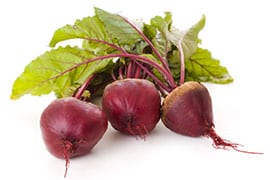